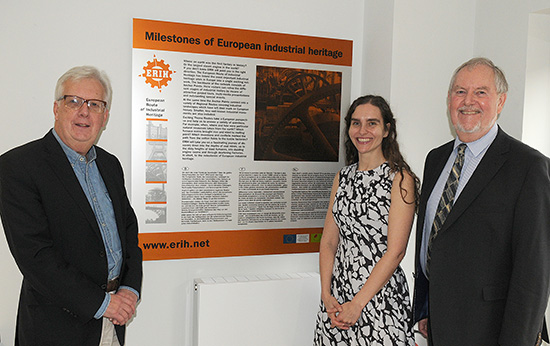 On Monday 14 December, Jonathan Lloyd, UK Co-ordinator from the European Route of Industrial Heritage (ERIH), a network of the most important industrial heritage sites in Europe, visited the newly restored Lion Salt Works Museum in Cheshire and praised its meticulous restoration and refurbishment. He also unveiled a new ERIH plaque, showing the Museum’s continued status as an ERIH Anchor Point.*

The award-winning Lion Salt Works Museum opened in June this year after a £10m four-year restoration thanks to a generous grant from HLF of more than £5m. The Museum, run by Cheshire West and Chester Council, is the last open-pan, salt-making site in Britain and one of only four sites of its kind in the world.  Its unique status means that the Museum is also a Scheduled Ancient Monument.

Since opening earlier in the year, the Lion Salt Works has proved a great success with visitors (over 10,000 paying visitors came in the first four months) as well as winning awards. Last month, the Lion Salt Works was named Best Newcomer at the Marketing Cheshire Awards and won the Award for Community Conservation from the Chester Civic Trust. Previously, the Lion Salt Works was Highly Commended in the Building Conservation category of the a Royal Institution of Chartered Surveyors (RICS) North West Awards and it won the Heritage Award in the prestigious 2015 North West Regional Construction Awards on June 5, its first day of opening to the public.

Jonathan Lloyd, UK Co-ordinator, European Route of Industrial Heritage, said: “On a number of counts, the Lion Salt Works is an outstanding and unique set of buildings and I am delighted to see that it has been so magnificently and meticulously restored.  It can be a challenge to reconcile the needs of restoring the building with interactive displays and large visitor numbers, but here it has been done very well indeed. Combined with its enthusiastic and friendly staff, I can see why the Museum is attracting awards and a high visitor numbers.”

Councillor Louise Gittins, Cabinet Member for Culture, Leisure and Wellbeing at Cheshire West and Chester Council, said: “I am delighted by ERIH’s endorsement of the Lion Salt Works Museum.  Cheshire’s salt defines our landscape, people and industry and we are pleased that this is now enjoyed by people not just locally but nationally and internationally.”

The Museum has a year-round programme of activities. For further information, go to westcheshiremuseums.co.uk

The Museum hosts an exciting year-long programme of activities and more details can be found at westcheshiremuseums.co.uk.

The Lion Salt Works features not only the large museum but a café, butterfly garden and imaginatively themed play area.  Located next to the Trent & Mersey Canal, the Museum welcomes many visitors who tie up at the Museum’s moorings.. Its unique and distinctive conference centre, created from one of the restored Stove Houses, is also proving popular.